A couple of weeks ago we were in Utah and spent several days around Canyonlands National Park.  We were hiking, taking pictures, camping and in general having a great time seeing new things.  Although we have been to Arches and Canyonlands before, we really wanted to spend more time in Island in the Sky and the Needles.  Our visit coincided with a new moon which meant we had an opportunity for great Milky Way shots in this Dark Sky area.  After a couple of nights shooting the Milky Way around the Needles, we thought we'd take our last opportunity to shoot the Milky Way at Arches National Park.  We spent a good portion of the day driving around and hiking around, trying to decide where we wanted to go back to once the sun set.  Mike used his Photo Pills program and we decided that Turret Arch, across from the North and South Windows would have the Milky Way aligned through it between 9:30-11:30 that night.  With our plan in place, we drove further into the park to find a place to watch the sunset.

We had purposely kept all of our camping/dinner supplies in the truck and found a picnic table area across from Balanced Rock.  As the sky darkened we cooked our dinner and got all of our camera equipment ready to go.  Around 9:30 we pulled back into the parking lot of the Windows and were immediately struck by how many cars were parked in the lot that late.  It was our first sign that we weren't going to be the only one out tonight but we sure weren't expecting that many cars on a Friday night.  We gathered our cameras, tripods, and flashlights and started on the trail toward Turret Arch.  We immediately saw that there was a bright light, right up by where we were headed.  I kept thinking it must be another photographer getting into position although the light never moved.  As we came closer we started to hear a few voices and as we came up on the rocks which we had scouted earlier in the day, we saw a group of no less than 25 people huddled together with their cameras facing the same arch.  Apparently we weren't the only ones with this idea but it did confirm to me that we had picked a good location, all on our own.  Fortunately no one was in the position off on the right hand side of the Arch that we were planning on setting up.  I determined that the light that had guided us to this point was in fact a spot light aimed at the face of the arch.  We set up our tripods in front of the spotlight and was relieved when someone else asked if they were going to turn that spotlight off.  The group leader said yes, so we used the light to set up our cameras and get into position.  After a few minutes the spotlight was in fact turned off and Mike and I spent the next several minutes taking long exposures of the Arch with the stars behind.

From listening to conversations the group was having, our guess was that it was a camera club versus a class, as most people seemed to know each other.  There was definitely a leader who did occasionally answer a camera question or two.  As Mike and I shot away, we noted that we didn't hear any clicking coming from their cameras and began to wonder what exactly they were doing below us.  Then out of nowhere the group leader tells his group to get ready to take pictures (Mike and I had been shooting for almost 20 minutes at that point, pretty happy with what we'd been getting).  They start fussing and asking about shutter speeds and ISO, and the group leader comes back up to our rock and turns the spotlight on directly behind us.  The problem with this is that it now cast a 40 ft silhouette on the Arch that everyone is about to photograph.  Not to mention it blinds us.  Immediately after turning it on the group leader runs up to the arch and is going to enter it.

To say that I was annoyed would be kind.  To say I was upset and confused would also be kind.  I finally called out to the group leader, "are you going to leave this light on because it's casting our shadow on the arch?".  His reply was a quick, "You have to move!"  This was not said kindly or askingly.  This felt like an order from someone I've never met before who just ruined my shot.  Three responses came to me.  First, that we could stay here (we've been in this position, away from his group for more than 30 minutes and hadn't bothered him) and we could ruin everyone's shot for the rest of the night.  Second, I could turn that obnoxious light out and start a fight.  Or third, move.  Mike and I looked at each other and did the right thing.  We grabbed our lights, tripods and cameras and made a move down closer to their group.  Upset at this point, I felt like "screw you then, I'm going to barge right into the middle of your group and claim a spot for myself."  So that's what I did.  A photographer on my left who could have gotten upset with where I placed my tripod in anger said to me a couple of minutes later, "Yeah I got kicked out of my spot by the group too."  That's when I realized that not everyone there was with this same group.

What the group leader ended up doing was using this obnoxious spotlight on the front of the Arch.  He placed another light behind the Arch to light up the inside which I immediately realized I loved.  Then he kept walking around with his flashlight, light painting grasses in my foreground to which I wanted to tell him to keep away from me.  After about 20 minutes of shooting in this direction, the leader tells the group that they should change up the position of their shots and move up to the part of the rock that Mike and I had just been kicked off of.  I quickly grab my tripod and got back into my original position along with my new photo friend beside me.  With the spotlight still in it's same position, now adding too much light to a particle bush that the rest of the group had in the foreground of their wide angle shot, the leader took the light 150 yards away to the other side of the arch to light it.  Now I realized that he could have done that from the beginning without ever having so rudely told us to move but I'd come to terms that this photo leader wouldn't be someone I'd ever respect or follow.

We continued to photograph until around 11:30 and pleased with what we had shot and still annoyed by the group, we decided it was time for us to leave.  We had scouted a second position behind South Window and decided to walk back there to take a few more shots of a different view.  Finally around midnight we decided to head back to camp which was an hour away, knowing that we were going to get up around 5:45 to get in position for a sunrise shot at Mesa Arch.

Away from the craziness we were able to laugh at ourselves and at the situation.  Mike said at one point he felt like it we couldn't beat them, join them.  The night didn't go how we had anticipated but thinking about it later and looking at our pictures, it was a happy accident that we had that experience.  We had never shot natural landscape at night before and having those additional lights to highlight the arch made for terrific shots.  Looking at our pictures without the light and with the light, we definitely like the light.  I still feel like that particular group leader was a bully but most photographers are pretty welcoming people.  Overall we had a fun time and an experience we won't forget. 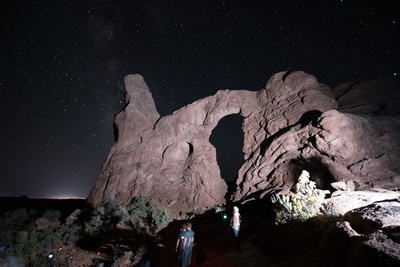 Full Spotlight on when we initially arrive.  The hotspot on the right is where we had originally planned on setting up and other photographers in their position more in front of the arch. 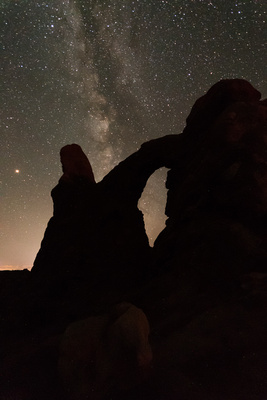 Nice silhouette with the Milky Way moving into position behind the arch. 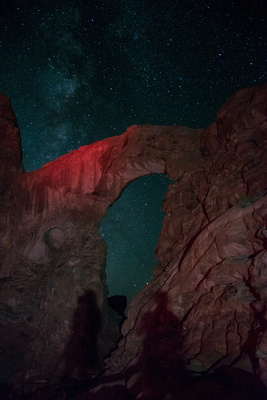 When the spotlight is turned back on behind us, our shadows are now cast 1/3 way up the formation for everyone to see/photograph. 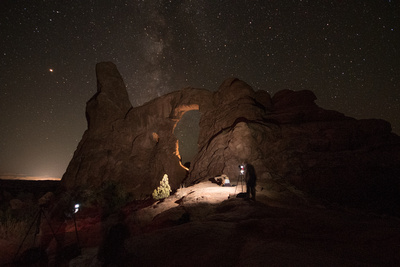 Back in our position

After moving down out of the spotlight to stand with the rest of the group, the group leader encouraged everyone to reposition themselves.  I go back up to my original position.  I am the one squatting in the spotlight, trying not to cast more shadows.  Mike lags behind taking this shot.  Fortunately that ill placed tree being overlit upset enough of the group that the group leader moved the light to the other side. 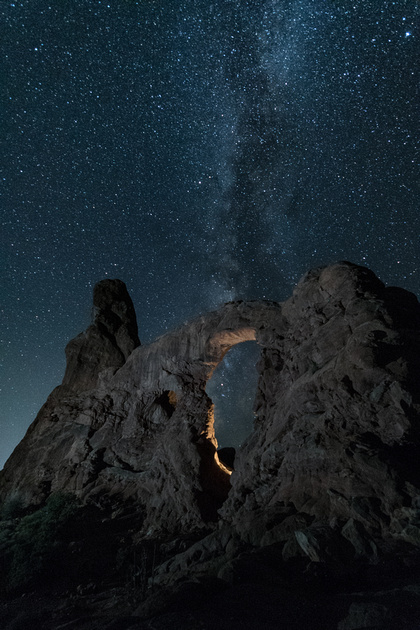 It took a long time getting here but this was Mike's final result.  The lights and Milky Way in a good position and those annoying photographers out of his way.  Every photo has a journey....