I met Charmaine in the fall of 2019 at Sassy Sister's, an organization made up of woman business owners who enjoy friendship as well as helping to promote each other's businesses.  When I heard that Charmaine was the editor of Venice Lifestyle Magazine, I wanted her to know that there was a photographer in the group and I'd love the opportunity to work with her and the magazine.

A few months later she called me and asked if I would photograph the Sassy Sisters meeting because she was running a story on them.  Since I was going to be there anyways, it was an easy assignment.  The pictures ran with the story and she called again the next month asking if I could take on another shoot.

I was honored when they wanted to feature ME in their July issue and use one of my wedding couples, Steve and Annie, on the cover.  Knowing that they had only featured a person on the cover once before, it was an honor that they liked my photograph enough to run it.  Steve and Annie were excited as well and I had fun getting them copies of the magazine so they could share it with their entire family.

As 2020 continued, Charmaine and the magazine's writer Tony, kept on calling.  Month after month they have asked me to photograph all sorts of people and businesses.  They know that I specialize in photographing people but I have had the pleasure of stretching my skills to photograph other subjects like food, lingerie, and beauty products.

So far they have used eleven of my photographs on the covers of their magazines.  I have written an article for the magazine and given Tony subject ideas.  I have met new people and learned about a lot of businesses that I never knew existed in Venice.

As the magazine continues to grow in 2021, I look forward to continuing to work with this amazing team. 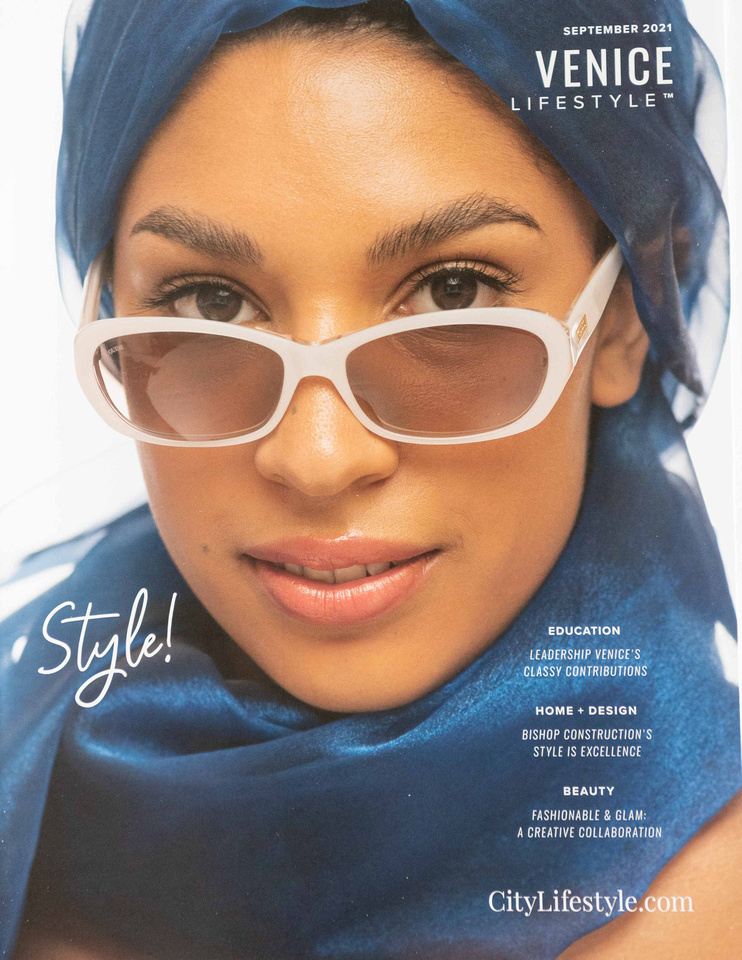 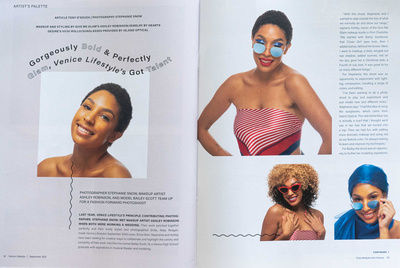 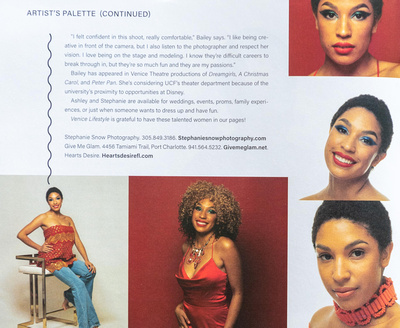 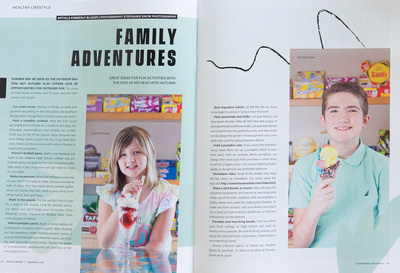 I am excited that a personal photo session I did for "FUN" was chosen to be in the magazine.  Makeup artist Ashley Robinson at Give Me Glam and model Bailey Scott and I teamed up for a fun day of experimenting with different looks and styles.  In addition, Scoops Ice cream kindly let us come in and have a photo session in their ice cream shop.  We all had a fun time. 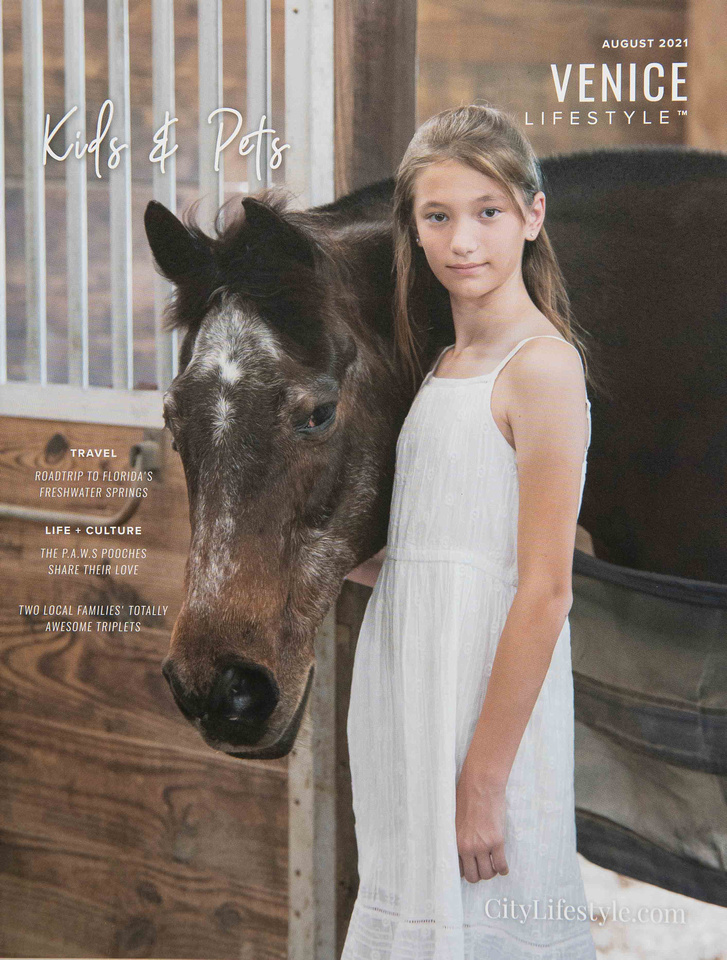 For the August issue, I had the pleasure of photographing two families with triplets.  We did one session at a local park and the other family session at Fox Lea Farms.  This young lady rides at the stables and her family enjoys watching her compete. 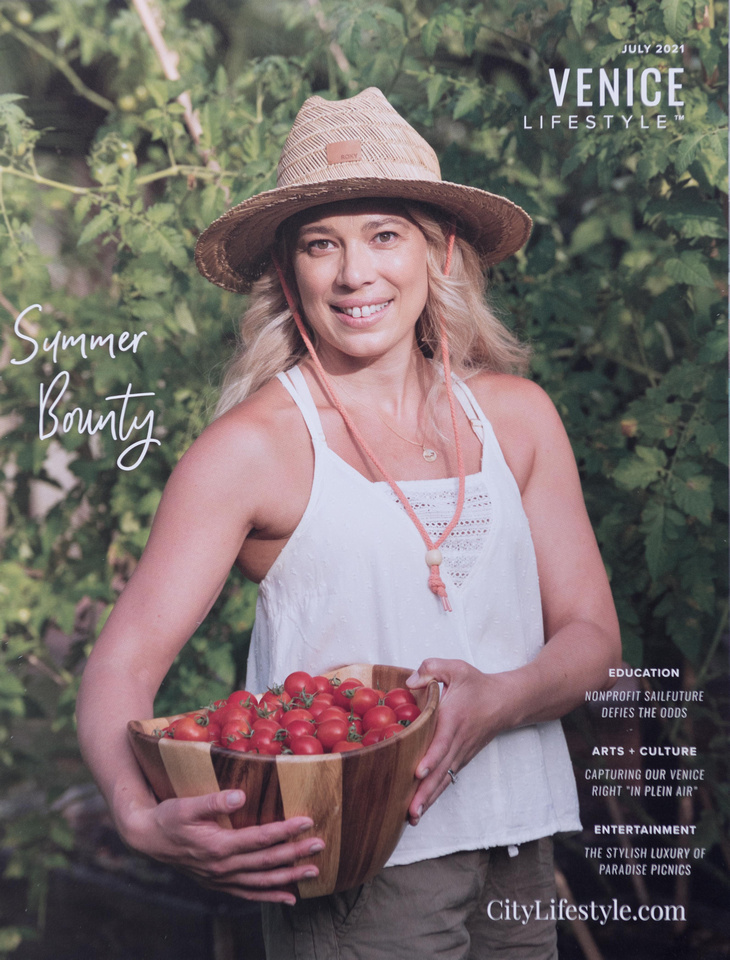 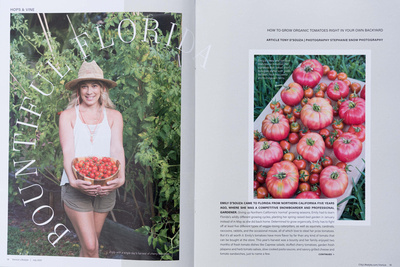 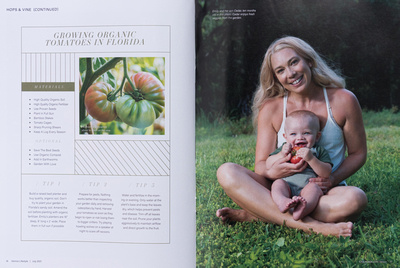 After a year of talking to Tony on the phone, he asked if I could come photograph his wife Emily for the July issue about growing tomatoes.  Not only was it great to finally meet his family and take fun pictures, they sent me home with a big basket of fresh heirloom tomatoes. 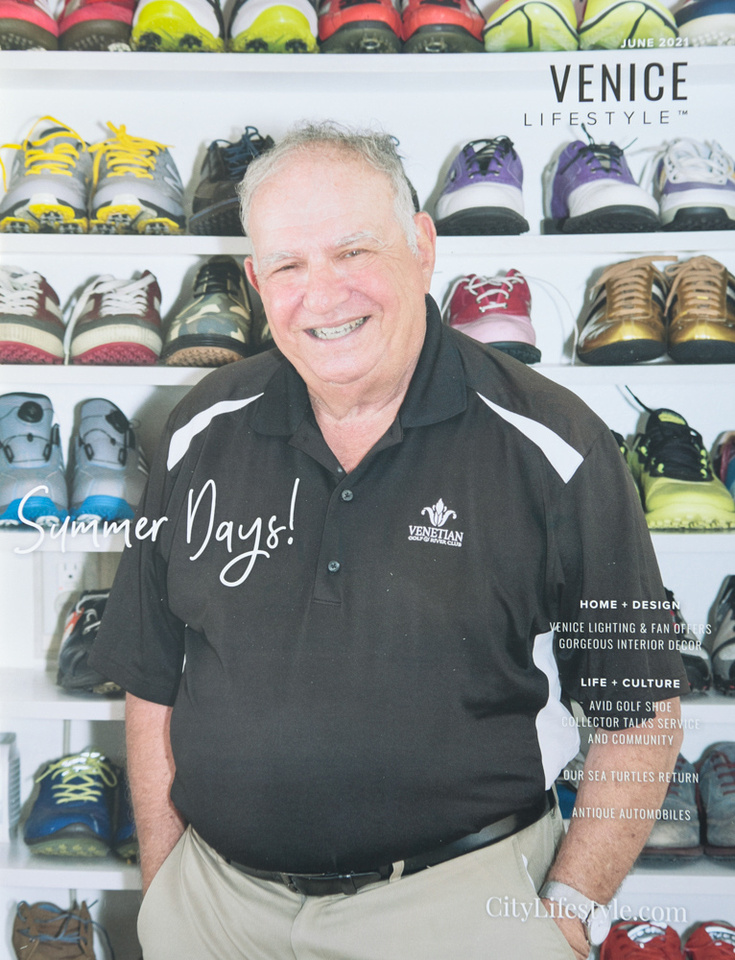 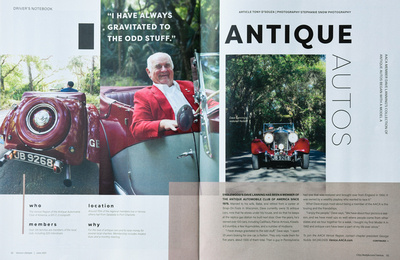 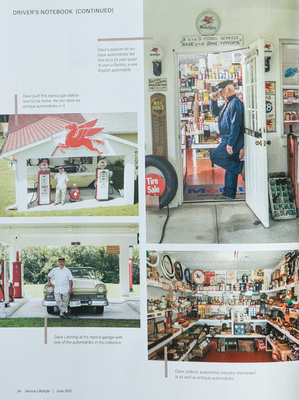 The June issue featured Men and Roger is an avid Golf Shoe Collector.  I also enjoyed photographing Dave Lanning and his antique car collection and am proud that he was featured inside. 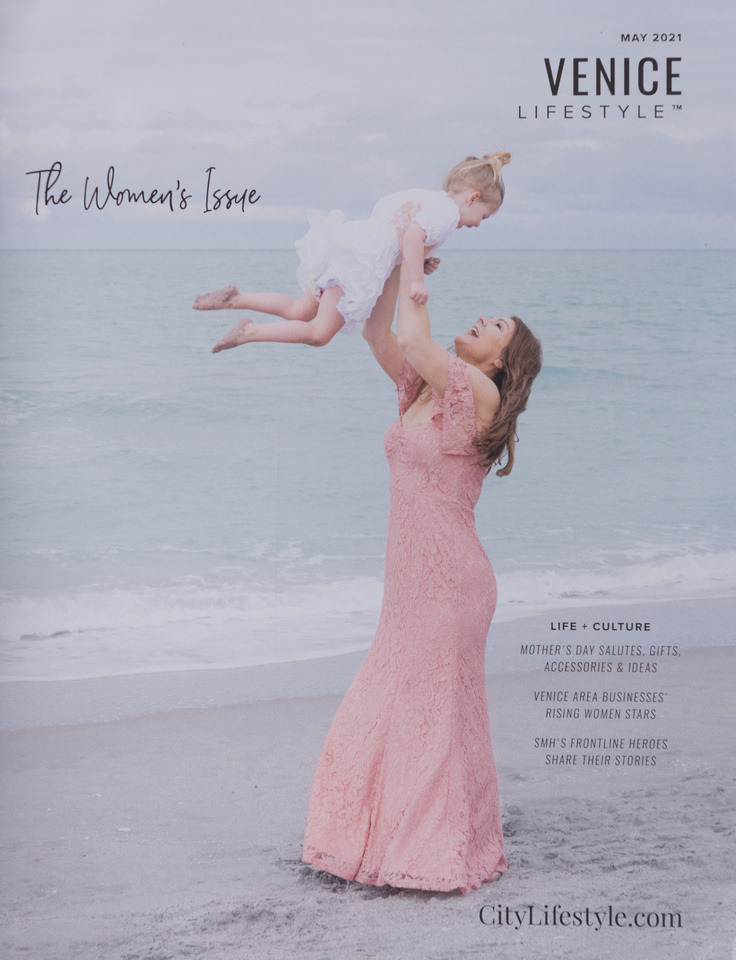 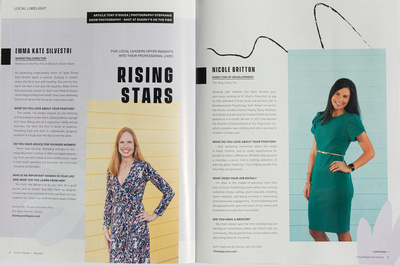 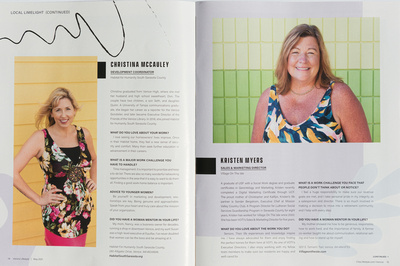 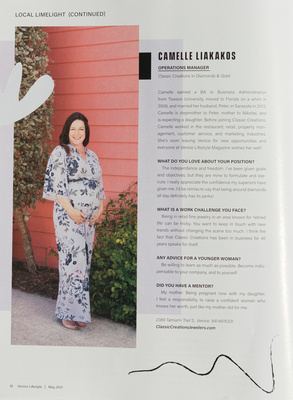 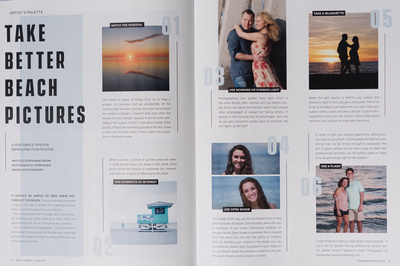 This special Mother and her daughter was an image from a family photo session I had just days before the magazine deadline.  Charmaine asked if I had any ideas for the cover and when I saw this frame, we both knew it would be perfect for the issue featuring Women.  Thank you to Kristen and Gabby for being amazing and looking beautiful at 9 am. 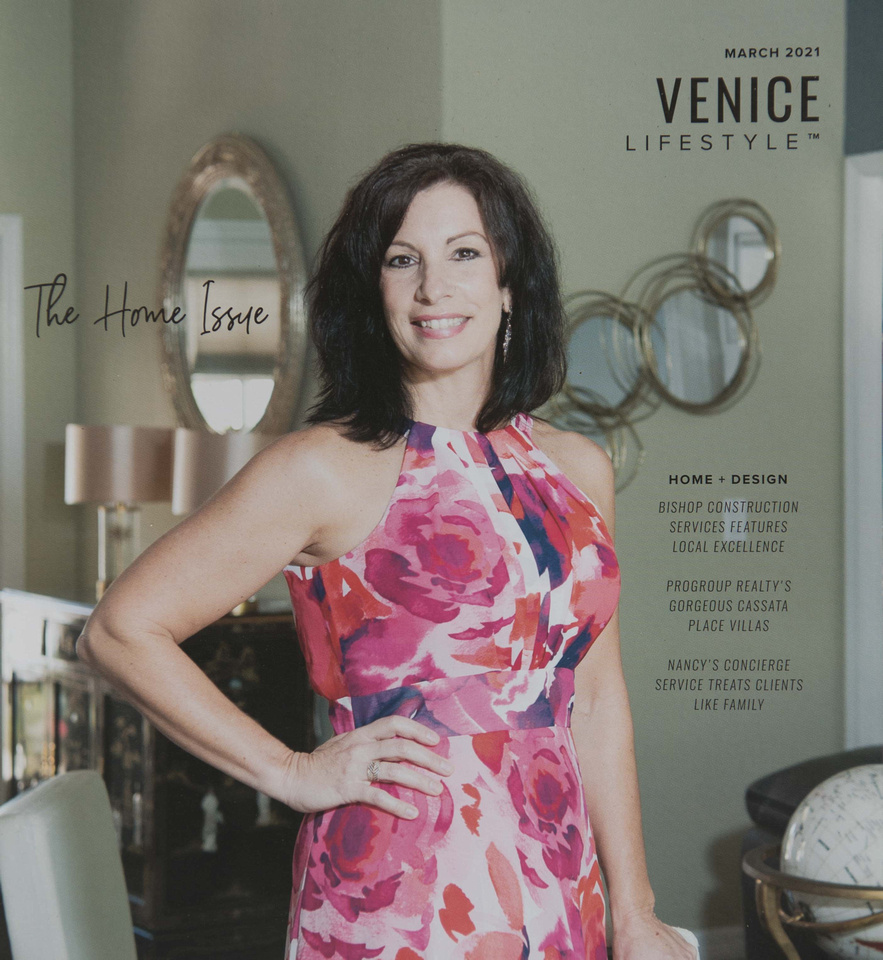 I had a fun session with Nancy Scott in her home.  She owns a concierge service and the photos were used inside the magazine to accompany her article.  Charmain decided that this photo was also great for the cover since the issue was about HOME services. 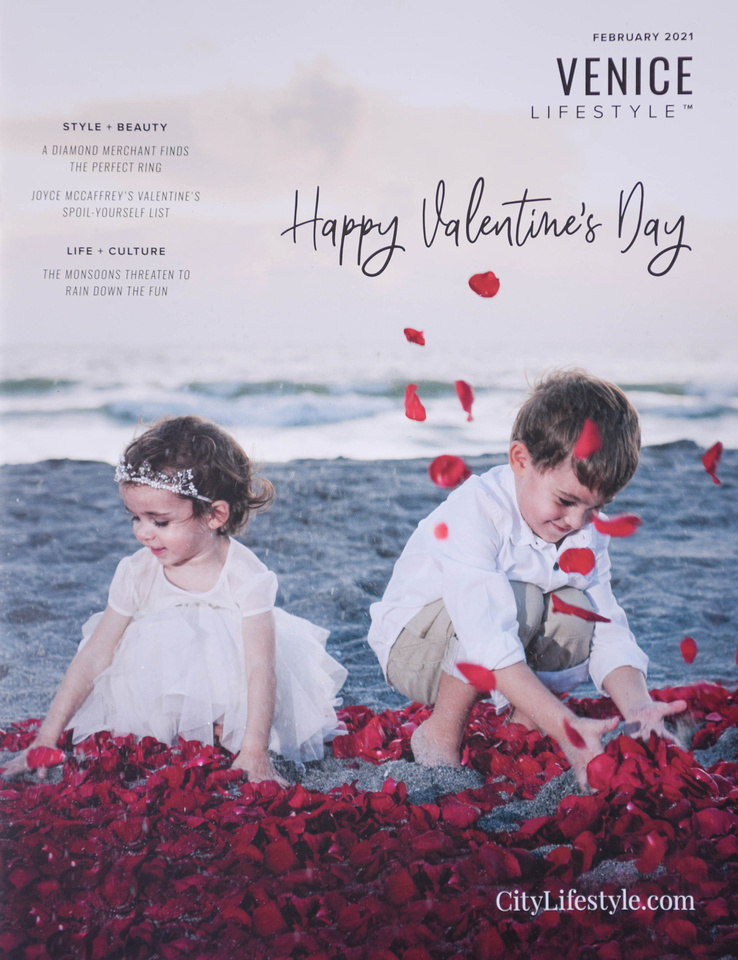 While photographing a wedding on Venice Beach, I captured this cute moment of the kids playing in the rose petals.  I proposed it to Charmaine as an option for the February issue and she loved it. 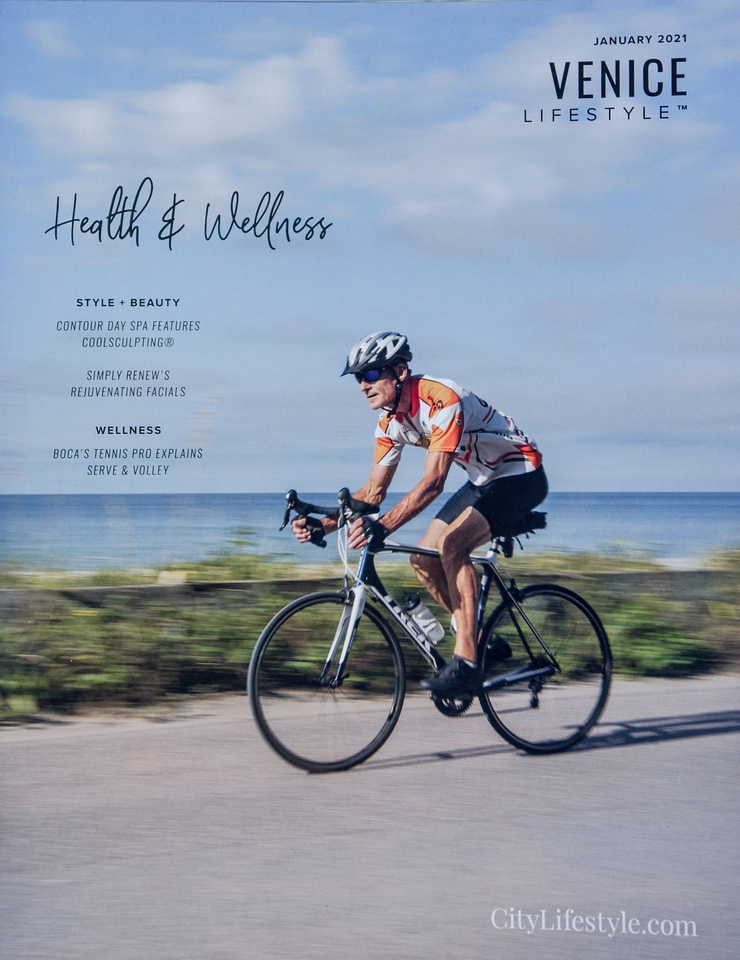 January 2021 issue featuring my husband, Mike Rogers on the cover. 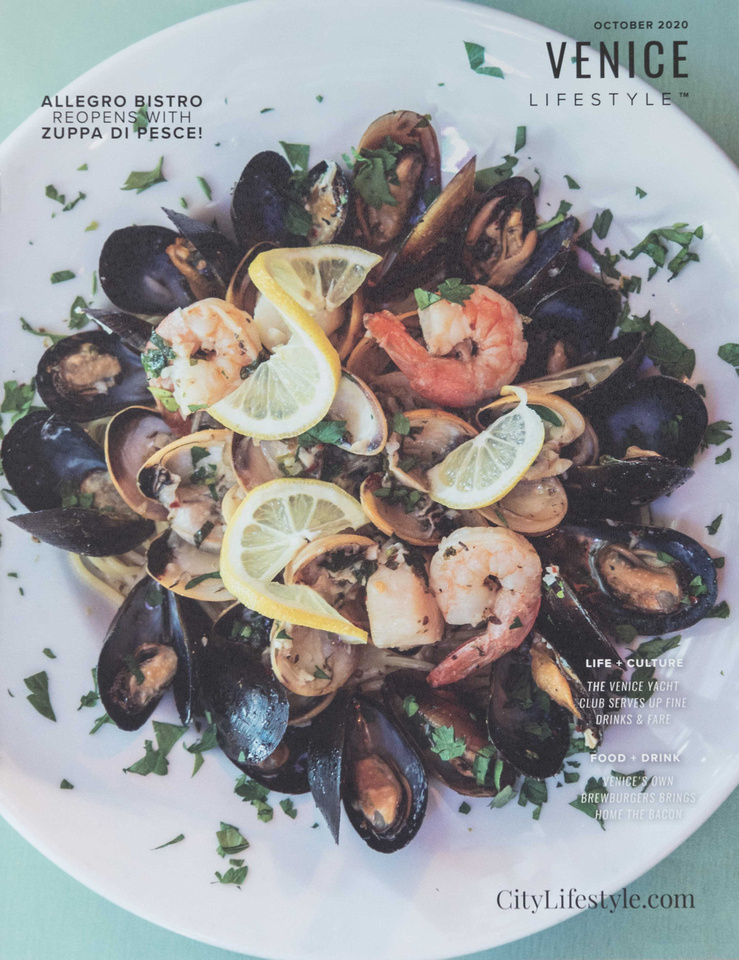 When Tony asked if I had photographed food before, I hesitantly answered YES.  I went to Allegro Bistro and the Venice Yacht Club and photographed their restaurants, people and food for the October issue.  It was fun photographing the food but it would have been more fun to sample it afterwards 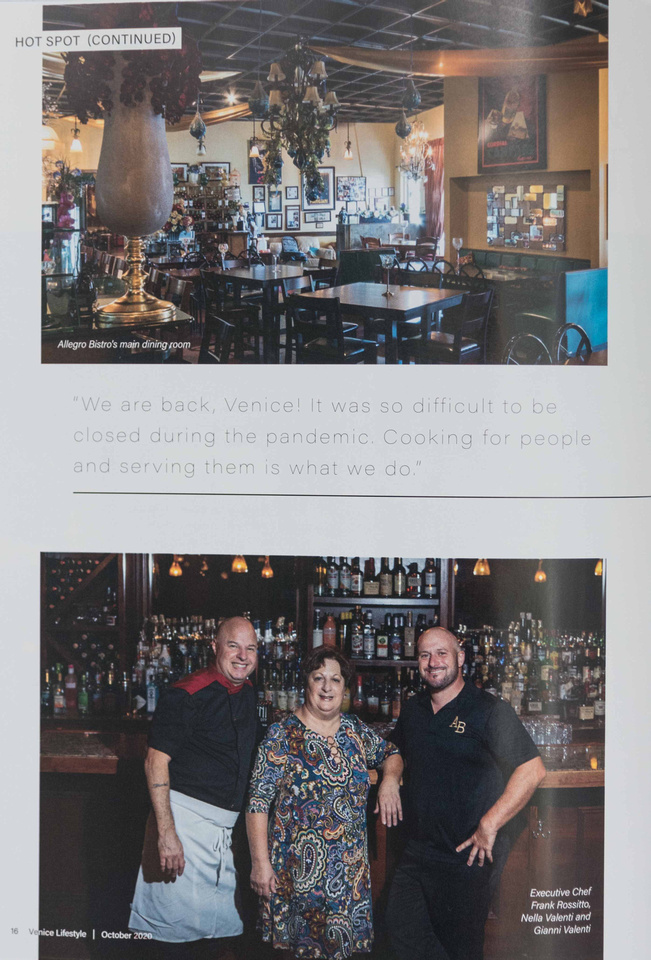 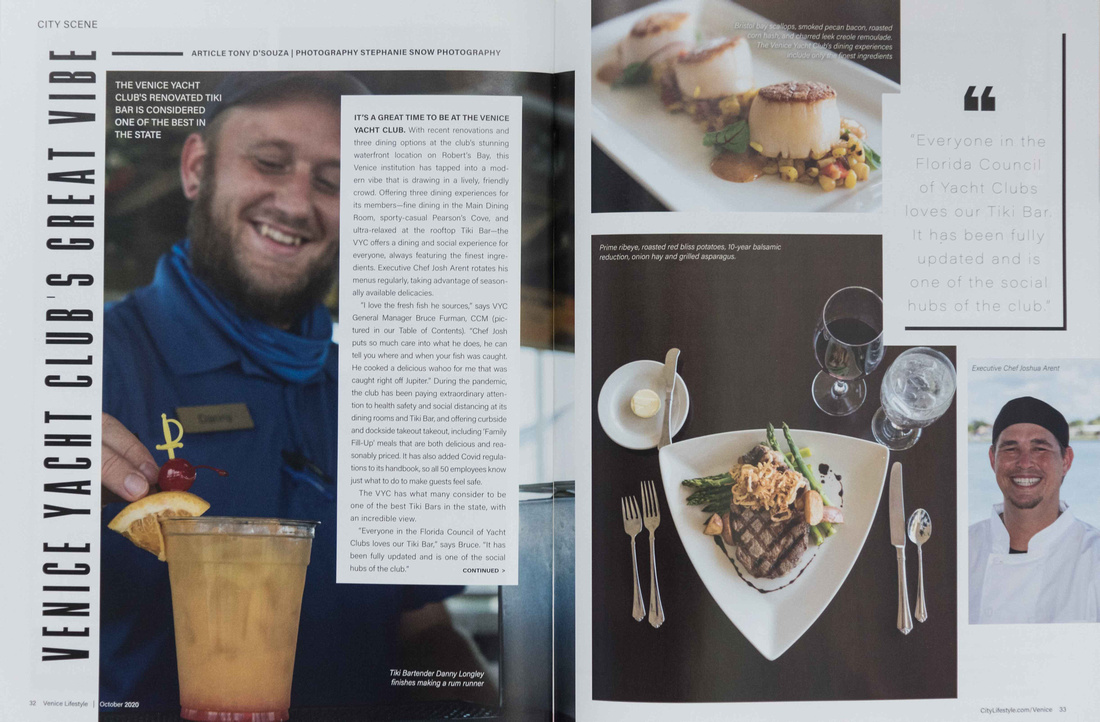 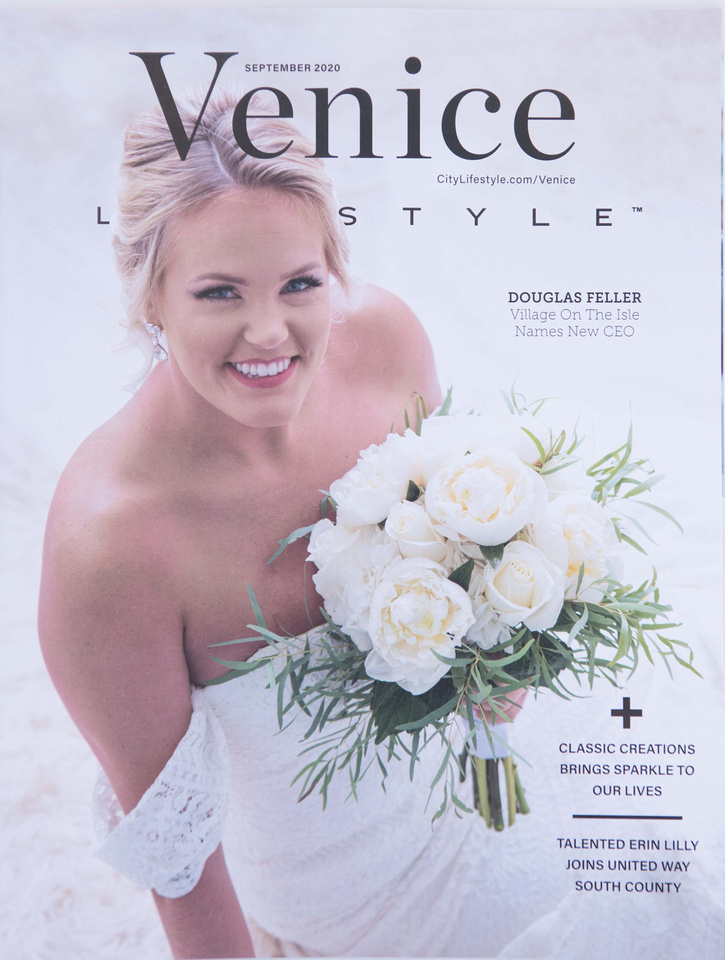 Tony asked me to write an article about photography for the September issue.  I had recently photographed Abby's wedding and included a picture of her in my article about "People Pictures, Tips to Take Better Portraits".  When Tony and Charmaine saw how beautiful she is, they asked to use a different picture of her for the September Cover about Fashion. 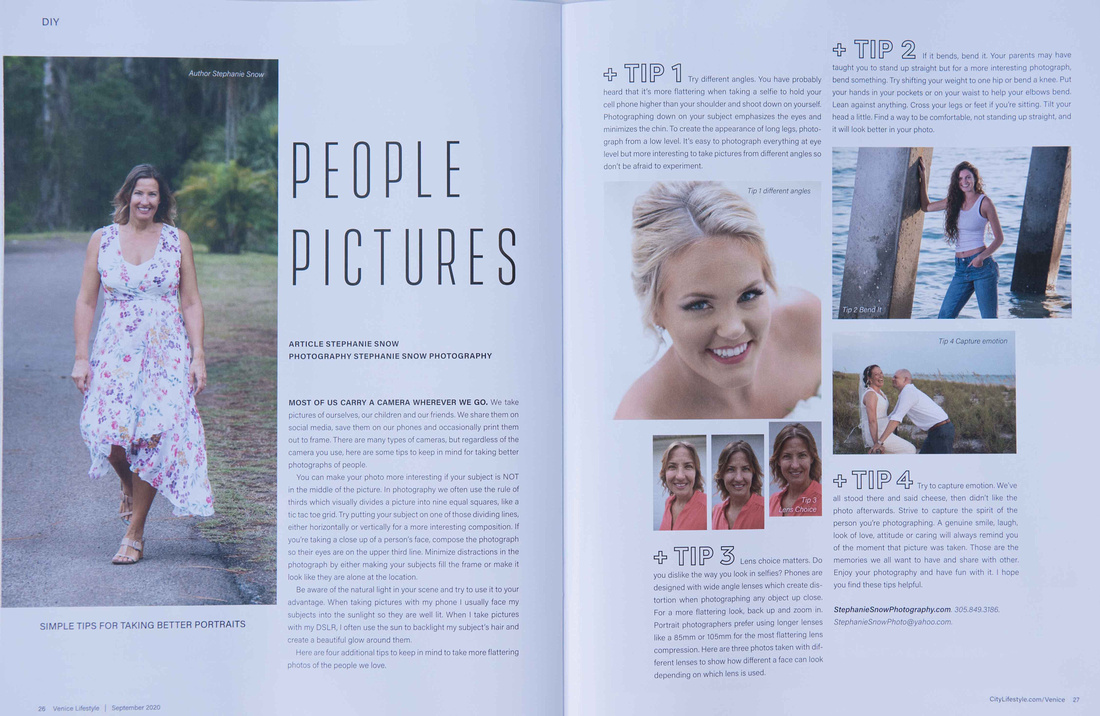 The story that really got it started for me was a feature they ran about ME.  They asked me to submit some of my favorite pictures from around Florida.  Over the years I have taken thousands of landscape and people pictures but I narrowed it down to a handful of my favorites.  We were all still in the early stages of mandatory COVID lockdowns but Charmaine was looking for a happy story (since we are always working two months ahead).  She saw my sunset photo of Steve and Annie and asked to use it for the July issue.  We were all honored to be featured. 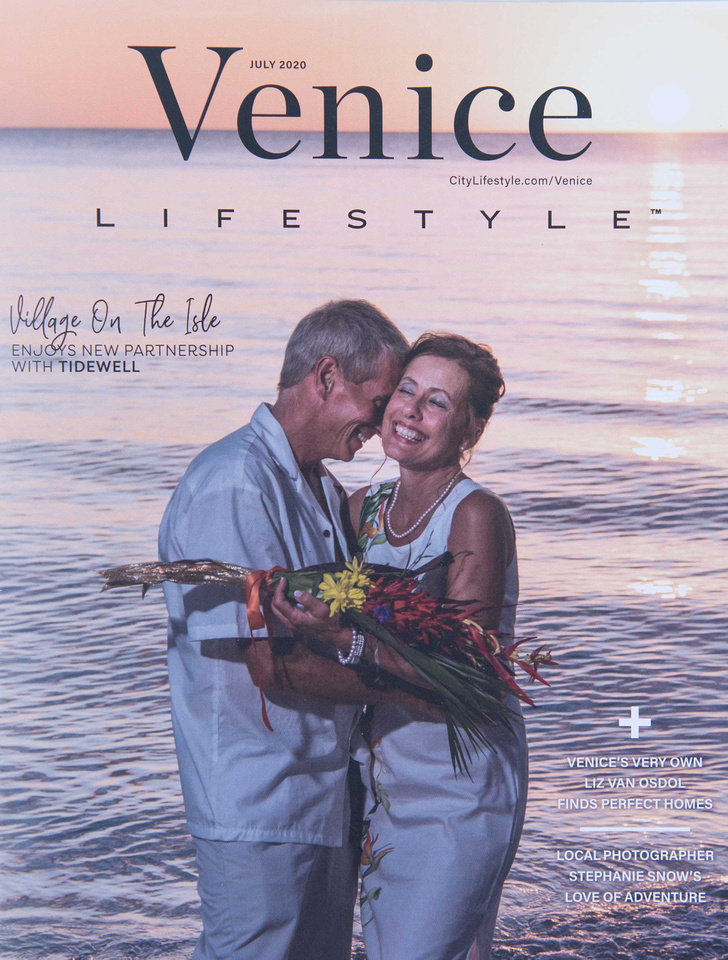 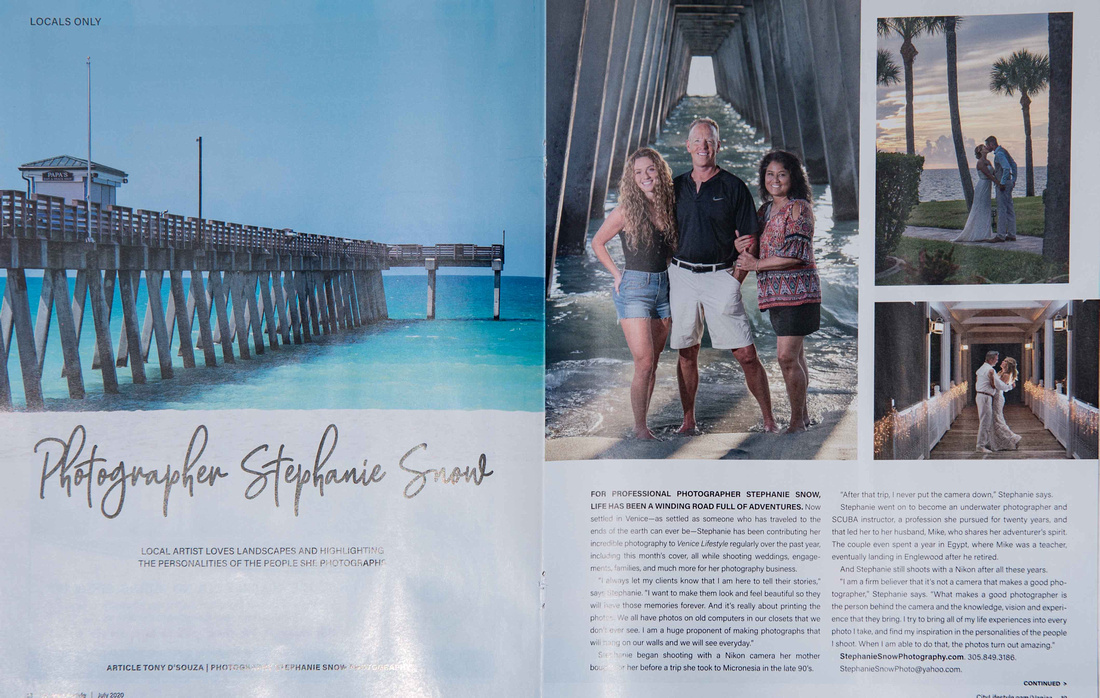 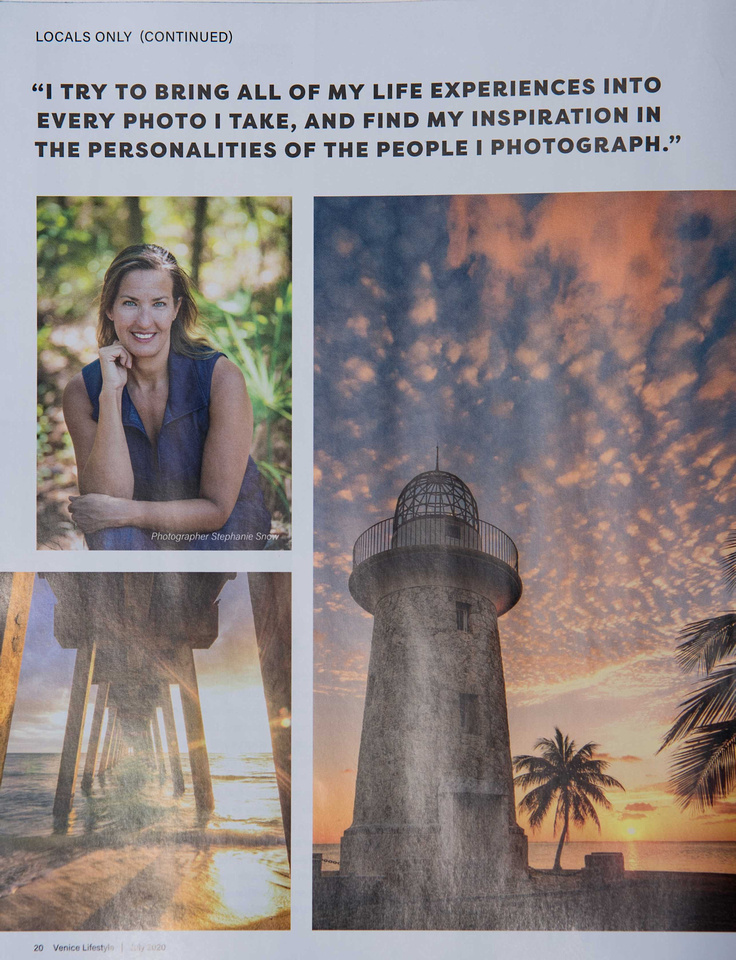 This is my first time reviewing this absolutely amazing Blog that you wrote Jan. 4th 2021 WOW, I am elated and lost for all the right words to express how surprised and thrilled I was to come across this Blog listed on your website! I hope you continue to add more Covers and More Features of all your Amazing Work you do for us at Venice Lifestyle Magazine. 2020 as we all know was a very tuff time. Venice Lifestyle Magazine having been launched in January 2019 finished our first year in business with Two Addy Awards and we were on a Growth Sprout. Not long into the first quarter of 2020 we were nominated and became a finalist for the Business of the Year through the Venice Chamber of Commerce. We were Nominated once again early 2021 for 2020 but I at the time didn't have the energy nor the right mindset to pursue. In being an open book, my setback in 2020 was my health as you know it was a long struggle and this is where I want to THANK YOU as you stayed the course with us and made trips to my home as I was very limited on my outside activity. As a Team which you professed in your blog, we are Amazing Together through Thick & Thin.. I am so Blessed to have you working with us as you are so busy running your own Amazing Business which is why we work so well together , we blend in helping each other to create smiles and memories for the thousands of lives we touch! Passionately, Charmaine
No comments posted.
Loading...
I love meeting and photographing families and each person has a story to tell.  Unfortunately there's never enough time or space to share everything but here's a little story and a few pictures of the amazing people I get to work with.
Subscribe
RSS
Recent Posts
Boca Grande Senior and Family Session with Raylee Fashion and Beauty Photo Shoot with Give Me Glam Gran Paradiso Engagement Session with Cristina and Kurt Epiphany Church and Venice Yacht Club Wedding with Kim and Brian Stump Pass Beach State Park Engagement Session with Jessi and Daniel Antique Car Collection, A Lifetime Passion Project for Dave Blind Pass Beach Wedding in Englewood with Sara and Chad Lido Beach Resort Wedding with Jennifer and Brian Blind Pass Beach Anniversary Session with Kristi and Randall Boca Grande Wedding with Holly and Andrew
Archive
January February March April May June July August September October November December
© Stephanie Snow Photography
User Agreement
Cancel
Continue