I'd like to say that I've heard Sarasota's hot new music group The Monsoons play but with COVID, I've stayed away from crowds for the past year.  So why I am blogging about them?  Because I really just want to show off some of the fun pictures I took with this great group of guys when I was asked to photograph them for a feature in Venice Lifestyle Magazine.

What I learned is that Pat McDonald spent years touring with the Charlie Daniels Band.  Steve Junot spent time playing on Bourbon Street before touring internationally with a zydeco band and also toured solo.  Chris Guertin has traveled the world as a Musical Director on cruise ships and plays with Kettle of Fish.  Finally these three talented musicians found each other and started a group of their own, The Monsoons.

I started out talking to Chris on the phone about the band and the style of photoshoot they wanted.  He lives in Sarasota and I'm in Englewood so meeting in Venice seemed the logical place.  He was looking to me for advice for our location shoot and after a day of driving around looking for an interesting alley or warehouse district in Venice, I was still a undecided.  I have always liked the Historic Venice Train Depot because of the architectural arches and bright yellow and green color.  He suggested a few photos at Troll Music store.  Since they are on the same block, we decided to take an hour and shoot at both.

When I pulled into the depot, the guys were laughing and talking.  I showed them some sample pictures of music groups that I had found online to see what they liked and what they didn't.  Pat immediately told me he liked the more natural, less posed pictures.  After I explained to him that even "natural" pictures were slightly staged, he was onboard.  Chris had two firm requests...no train tracks or brick walls because they were clique and overdone.  Got it, let's go.

Since it was 30 minutes before sunset, we went to the west side of the Depot which was lit by the late afternoon sun.  We started with some walking shots where I simply let the guys be themselves and laugh and talk.  I loved the side light that was hitting them as they walked through the arches and when I showed them how good they looked (on the back of the camera), they were happily surprised and I knew I had them on my side for the rest of the session. 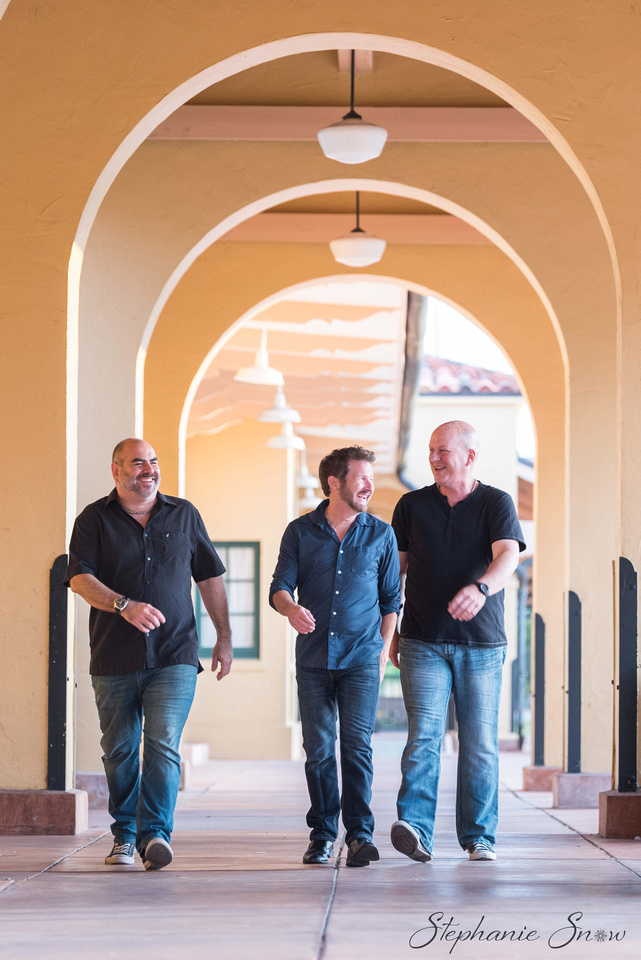 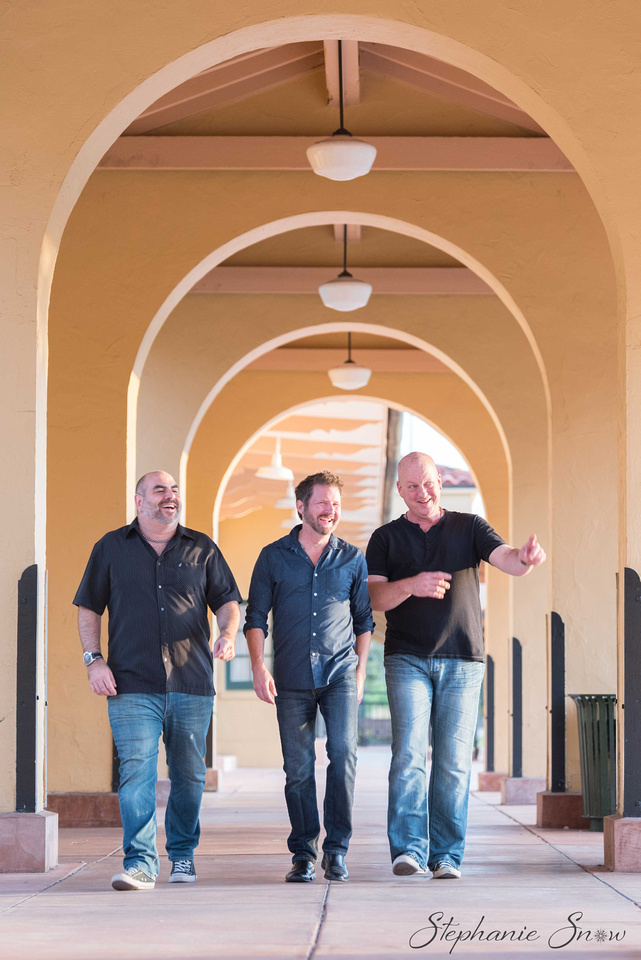 Trying for a variety of looks, we found a couple of interesting spots on the outside of the depot. 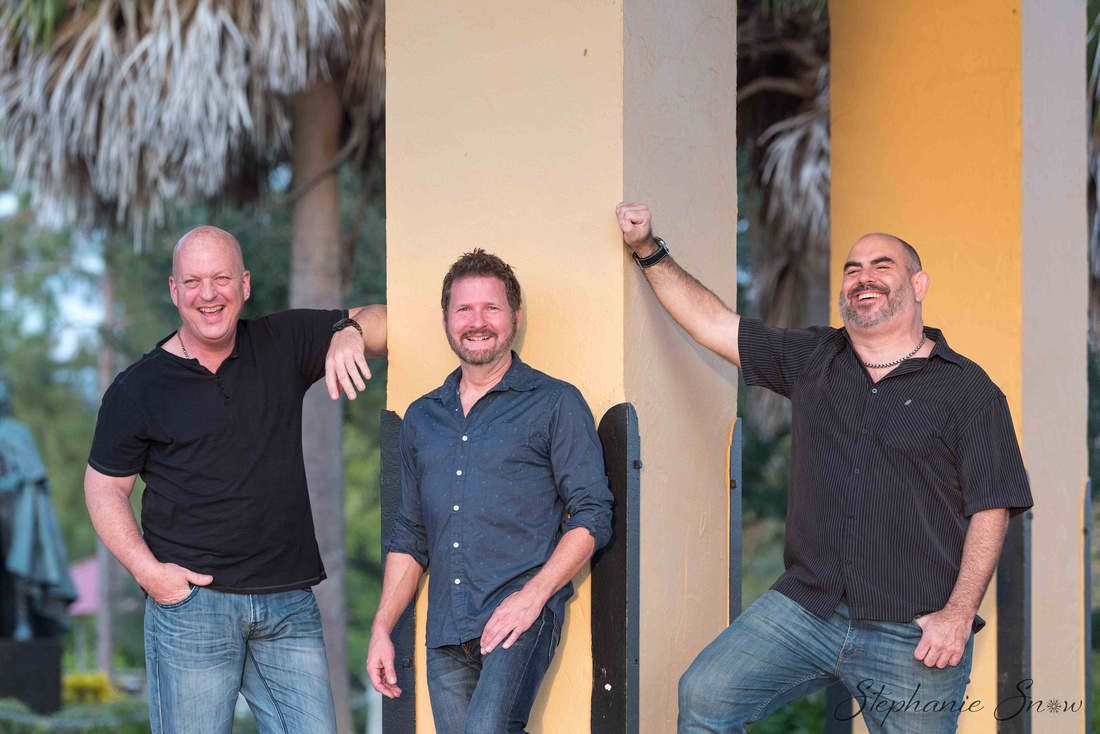 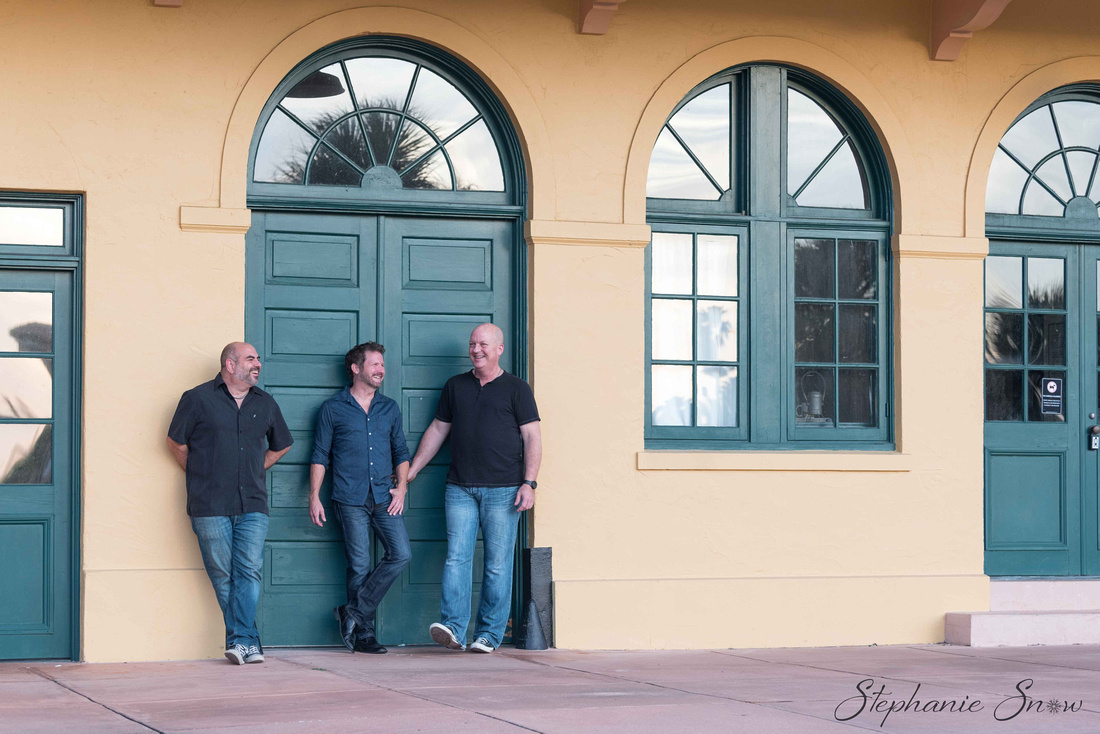 Next I took individual photos of the guys.  Several months ago I saw this arch and knew I would take a picture with someone in it someday.  Pat was willing to chill here. 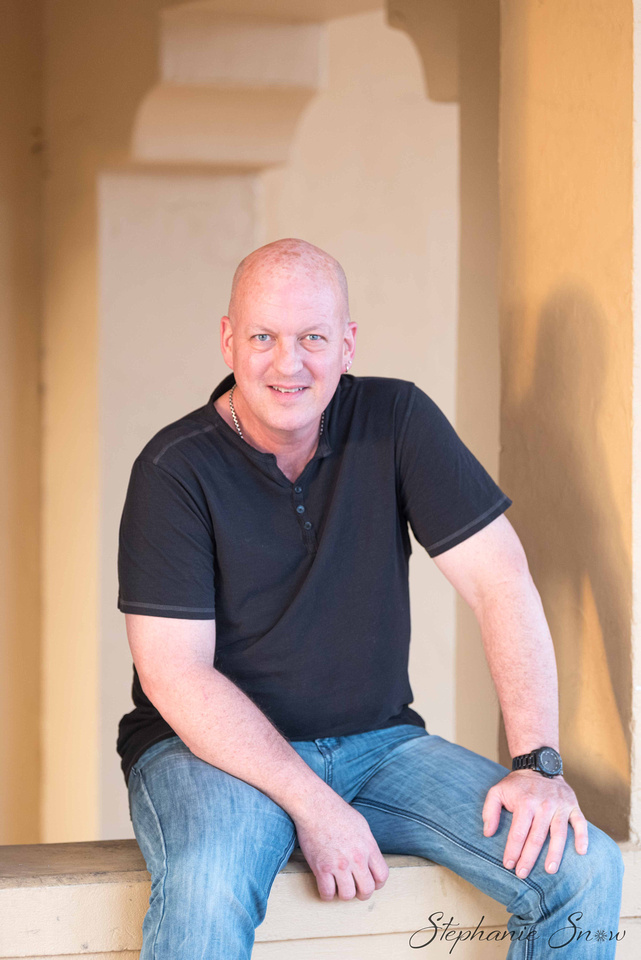 Next was Steve.  I loved the repetition of the arches and park benches and thought the lighted sign behind him gave us a great pop of color.  We waited for the perfect moment when the people waiting at the depot were out of the shot, and Steve gave me this laugh and smile.  I LOVE how natural it is and I feel like it sums up his personality in this moment in time. 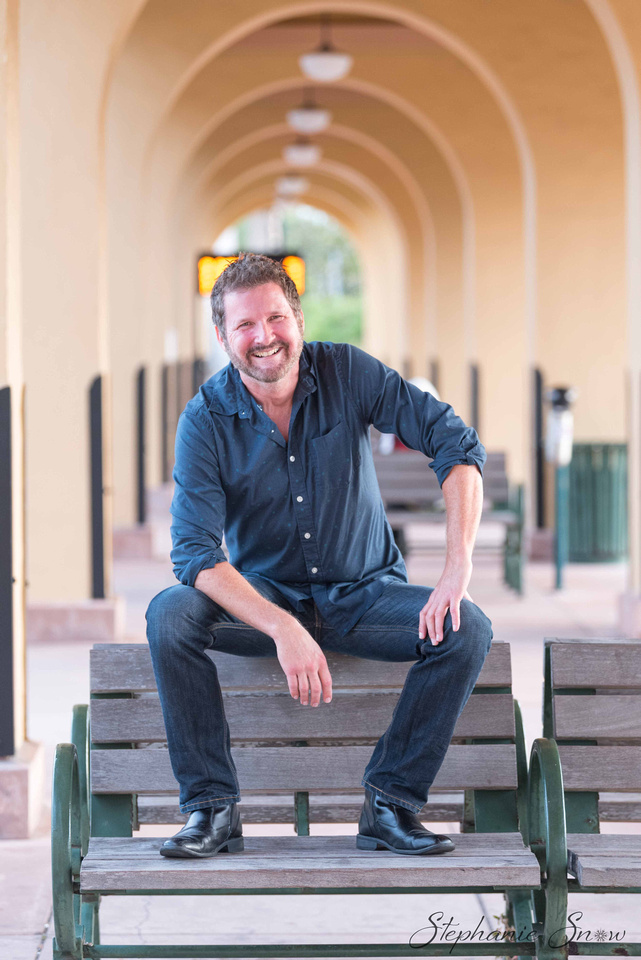 Finally it was Chris's turn.  I liked a couple different spots for him and his smile and happy attitude came through. 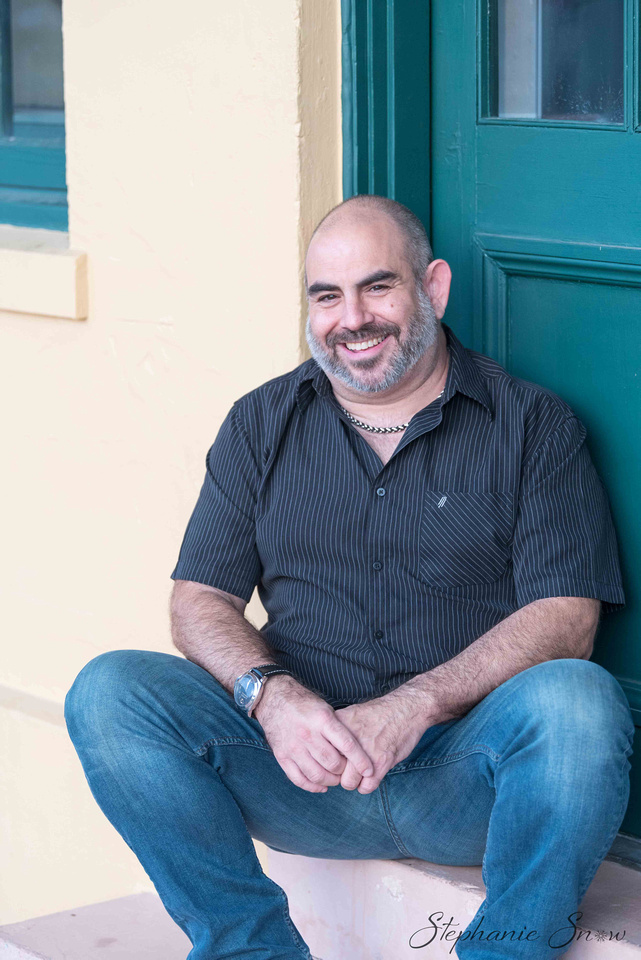 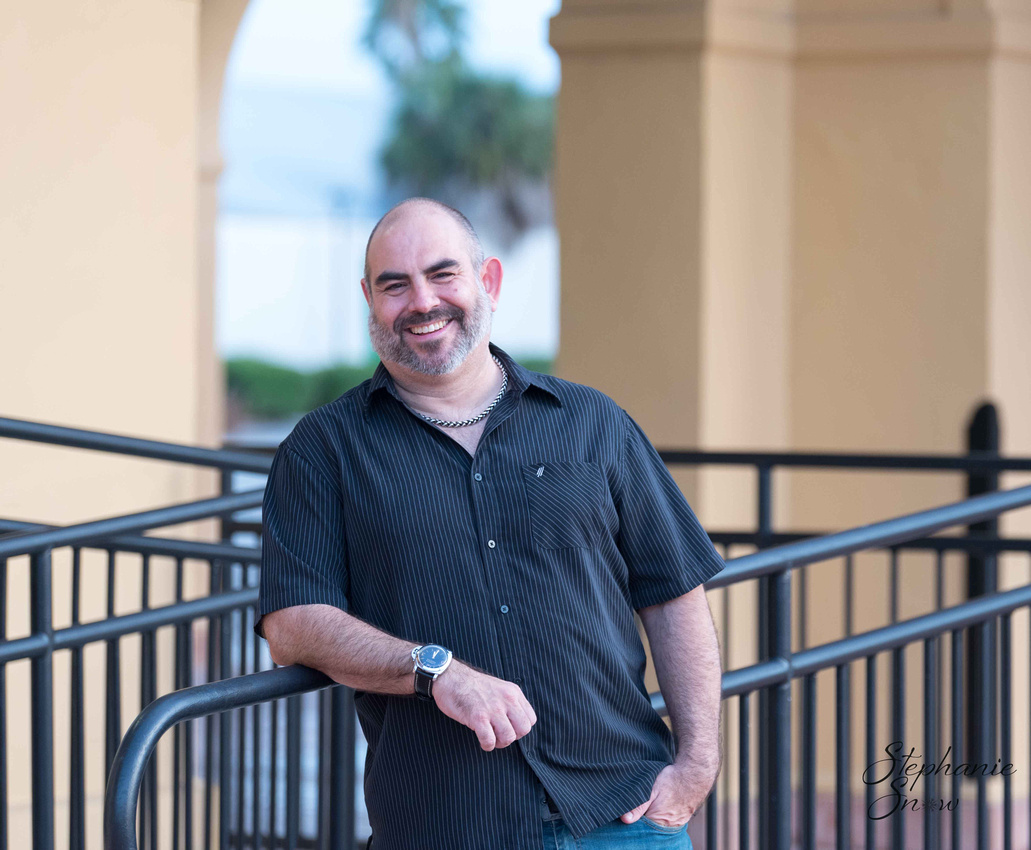 As I was driving to the Depot, I noticed this gray building and more importantly, this green door. Although I've been to the Depot numerous times, it wasn't until I was thinking about photo spots that this jumped out at me.

We walked over to it and I confirmed that all of their tetanus shots were up to date.  The platform is rickety and old but they carefully jumped up and got comfortable.  I moved away to let them goof around and got these "natural" photos! 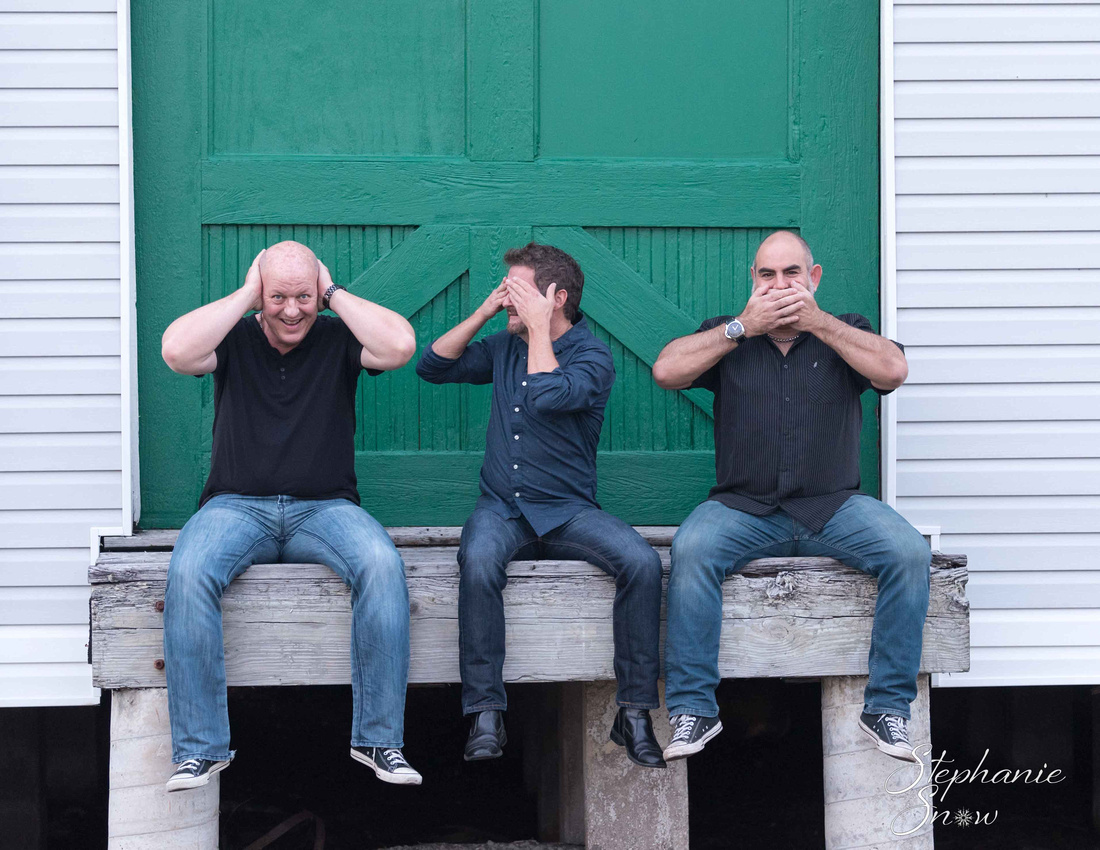 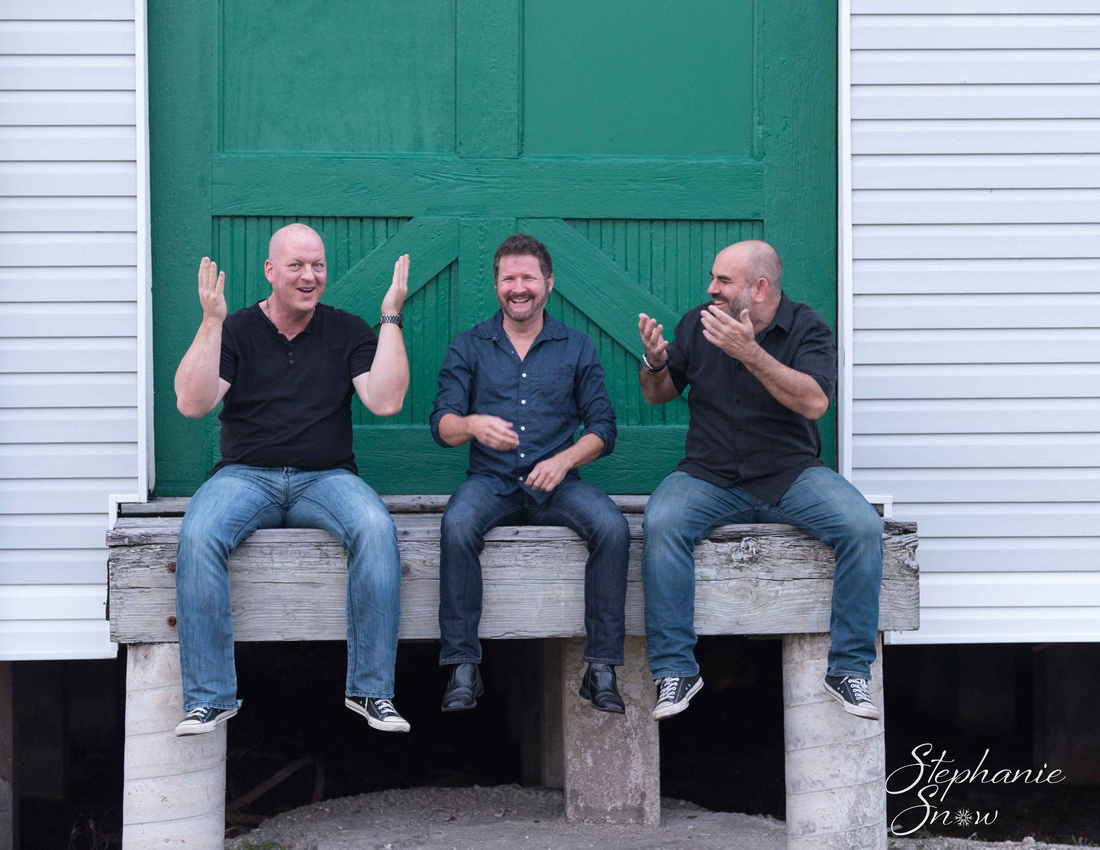 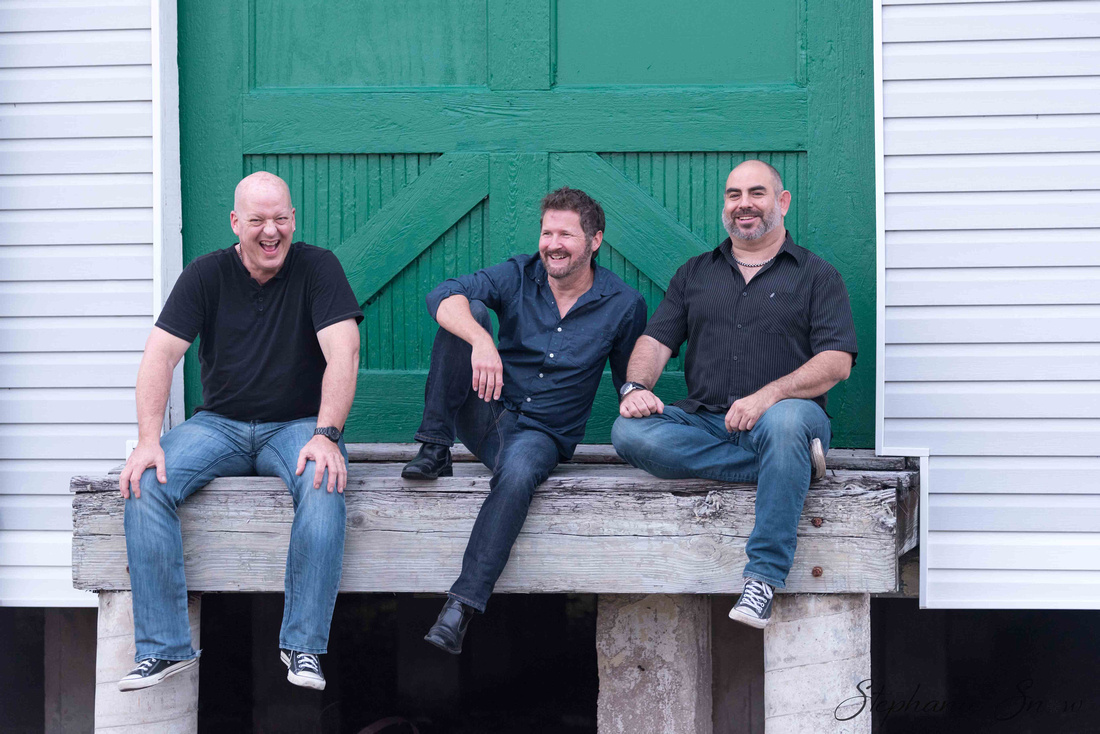 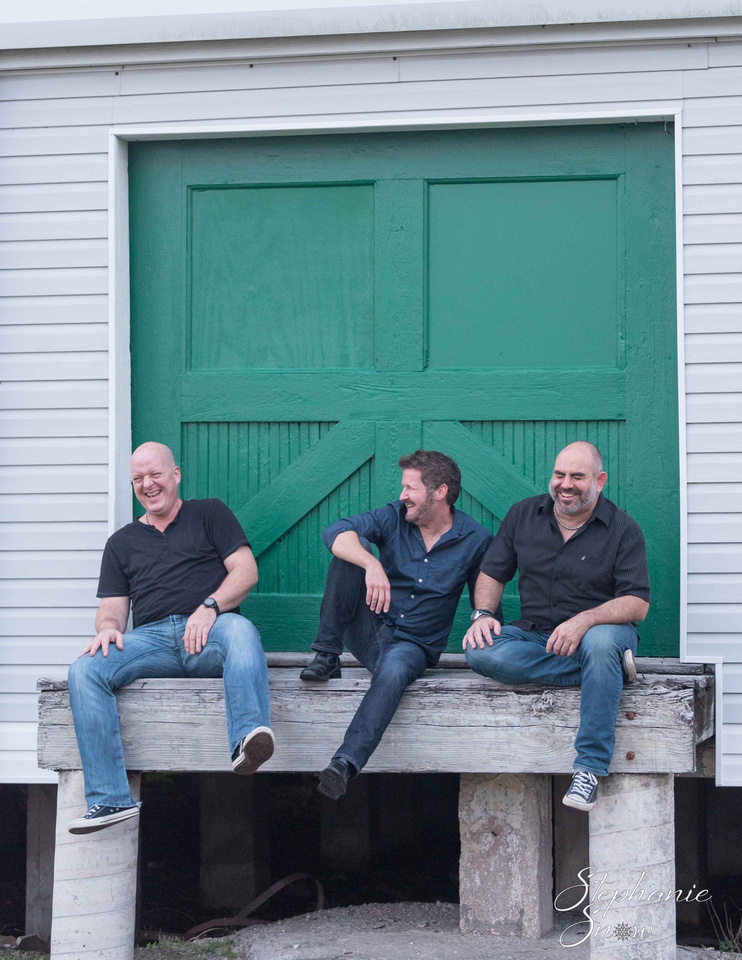 Then it was back to the depot and time to pull out their guitars. 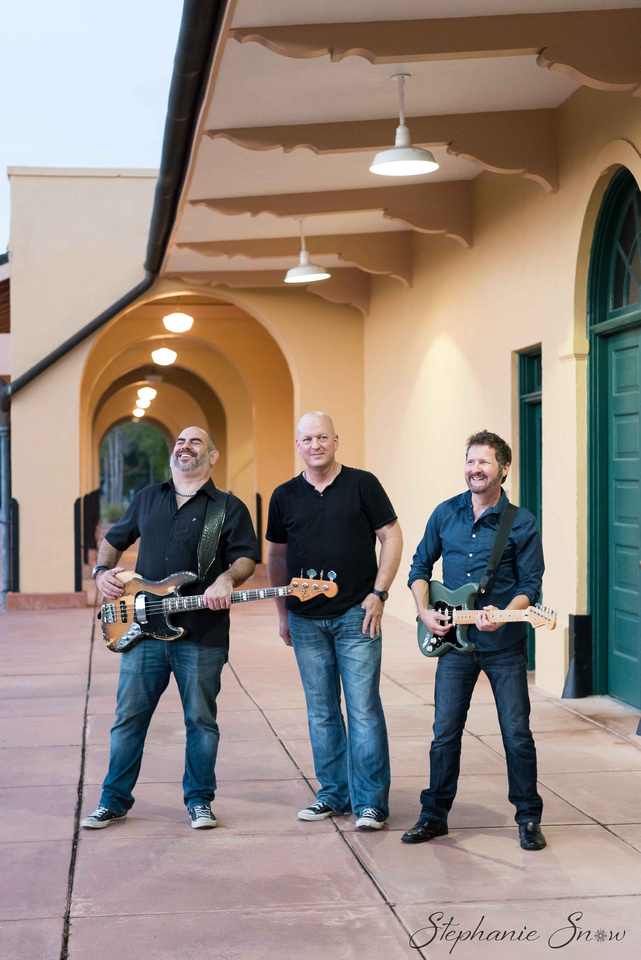 So there we were...at a train depot, standing right next to train tracks!  We've been laughing and taking photos for 30 minutes so of course Steve walks over and imitates the classic walking away shot.  I quickly grabbed one frame before he moved away and Chris said, "NO, This is how you do it".  So of course I took a photo! 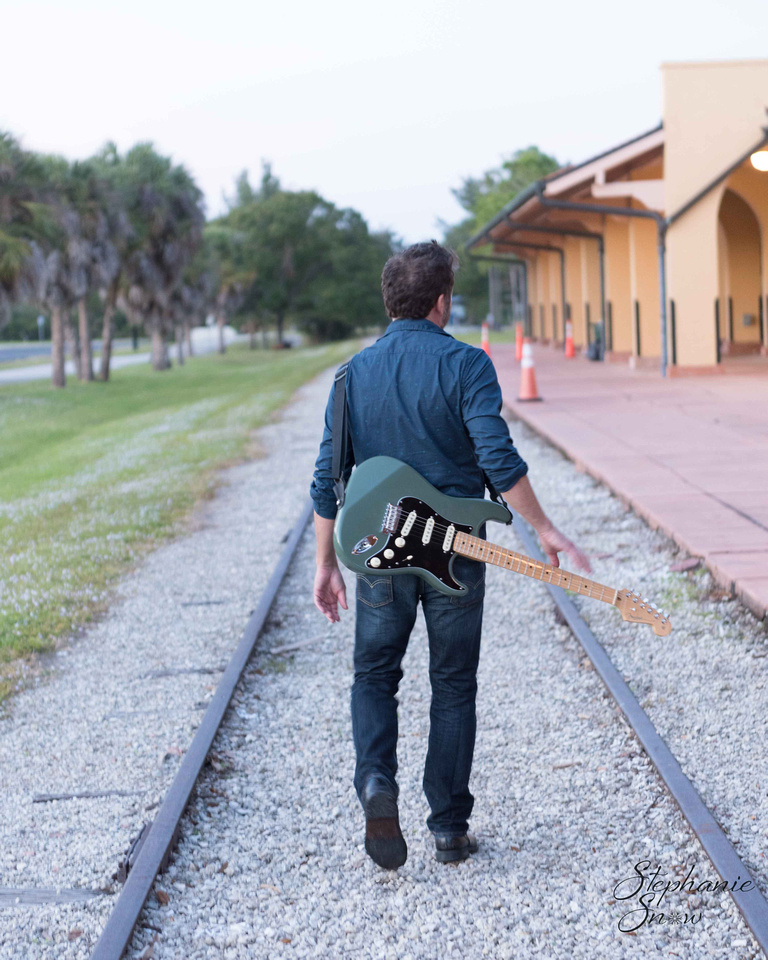 Finally it was 6 pm and Troll music had closed their doors.  They had kindly given us permission to come in after hours so we wanted to be efficient and thankful to them.  We headed down the street and spent a few minutes in there capturing some great images.  Since I have no musical talent, I had never been in there before but I highly recommend it to anyone looking for music, instruments or lessons.  They were extremely nice despite it being the busy Christmas season. 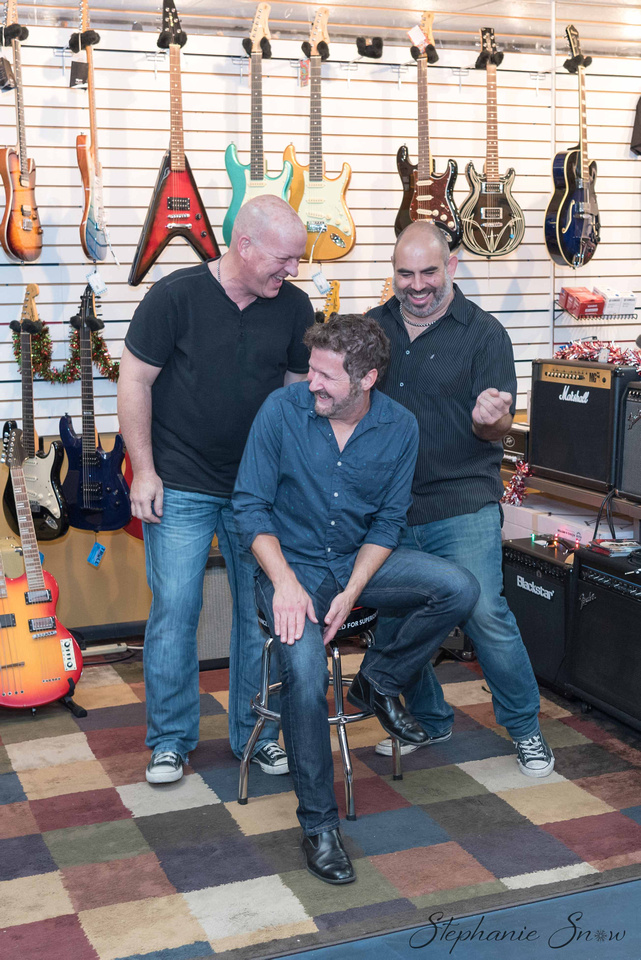 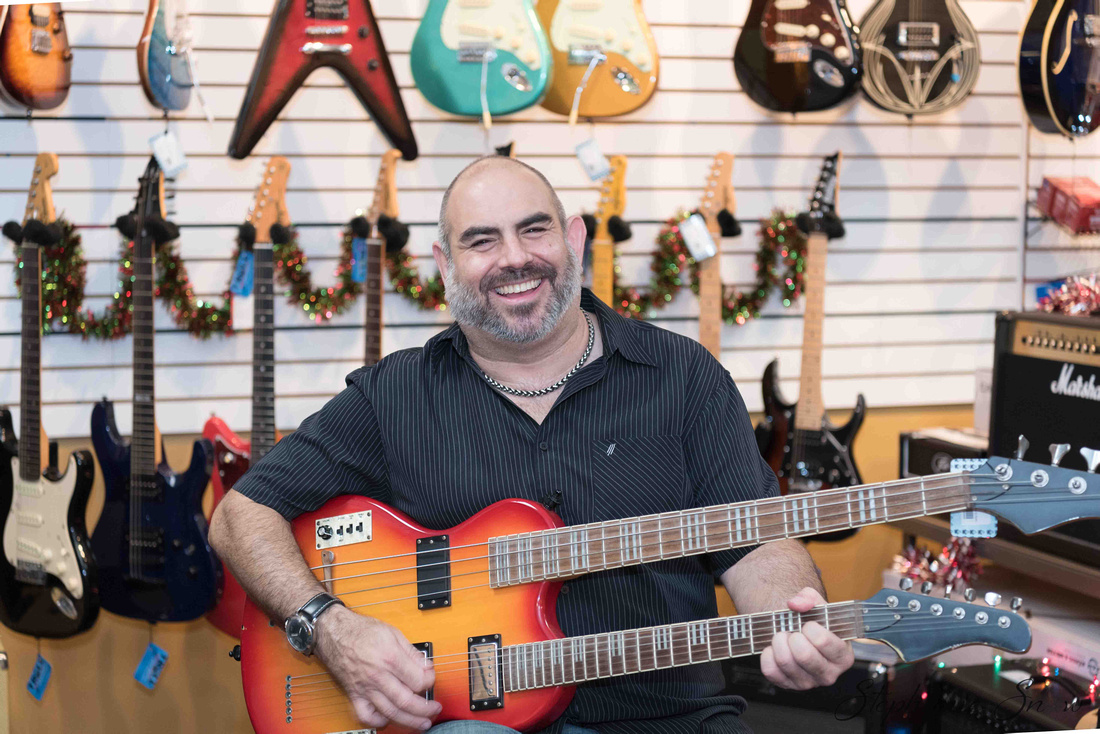 It was time for our session to wrap up, the store to close and the guys to go home to their families.  I promised that I will catch a show, when I'm comfortable being back around crowds.  In the meantime these three continue to perform several times a month at different venues around Venice and Sarasota.

I meant it when I told them that they have been one of my favorite photo assignments for the magazine.  Three photogenic guys who love to laugh and put their faith in me to capture some fun images, made for a really fun shoot.

To end this story, as a joke I emailed the editor the picture of Chris on the train tracks and suggested he tell Chris he wanted to use it on the cover.  To my surprise, he DID want to use it on the cover and Chris shockingly gave permission.  So if you're wondering why the photo with Steve has construction cones and the one with Chris doesn't, that's the reason why (plus you were paying attention so good for you!).  Knowing it was being considered as the cover, I cleaned up the image.  In the end, the magazine decided to go with a different photo of mine that fit the Valentine's Day theme of this February issue.  But I still love how the story and spread turned out. 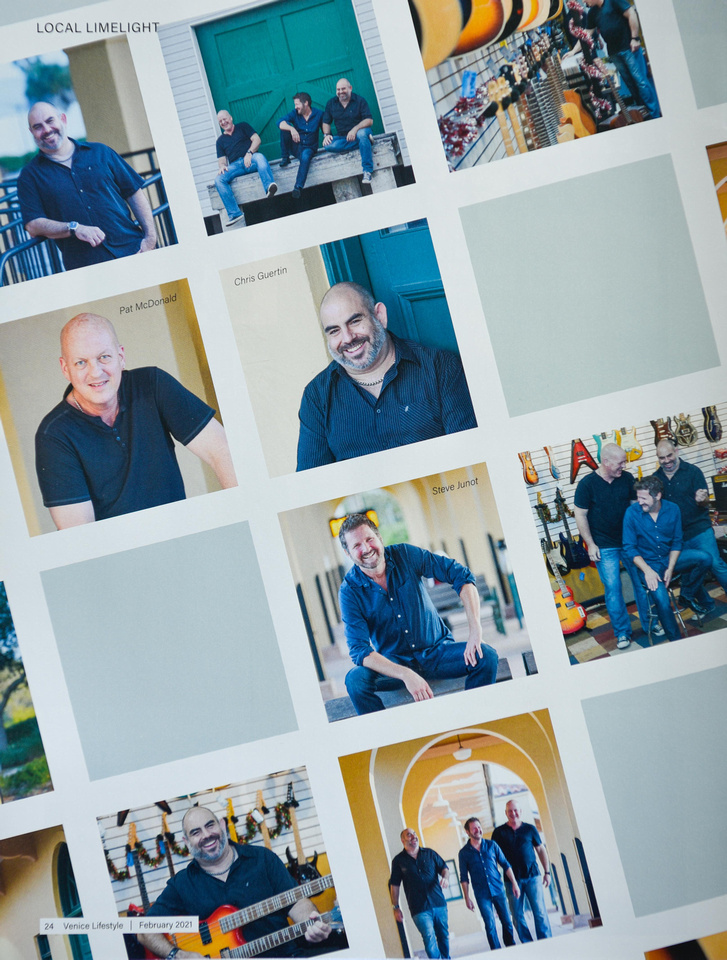 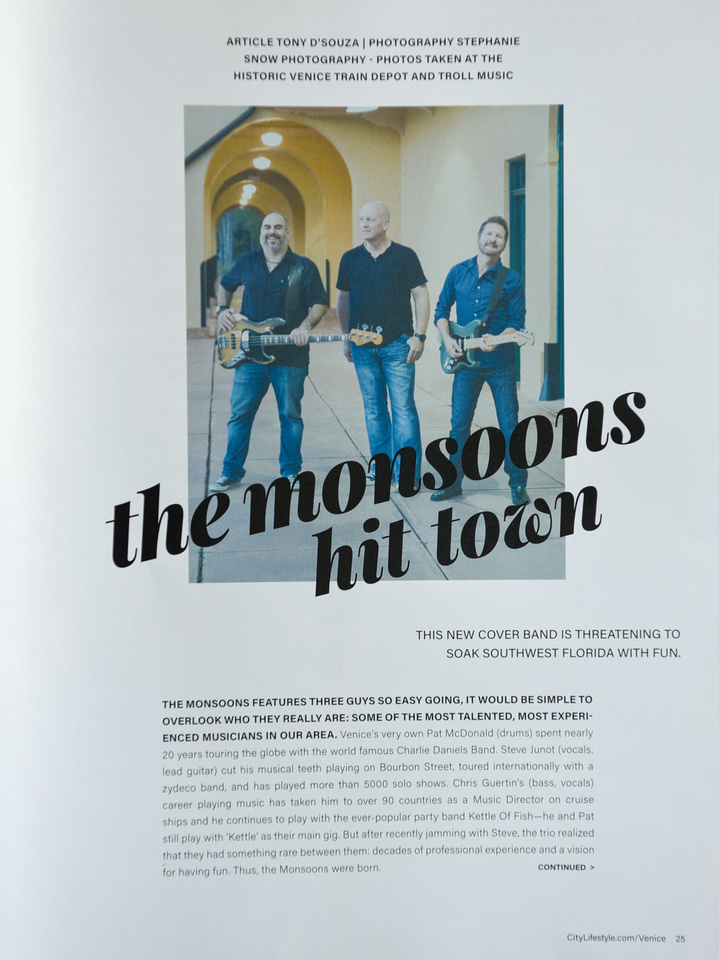 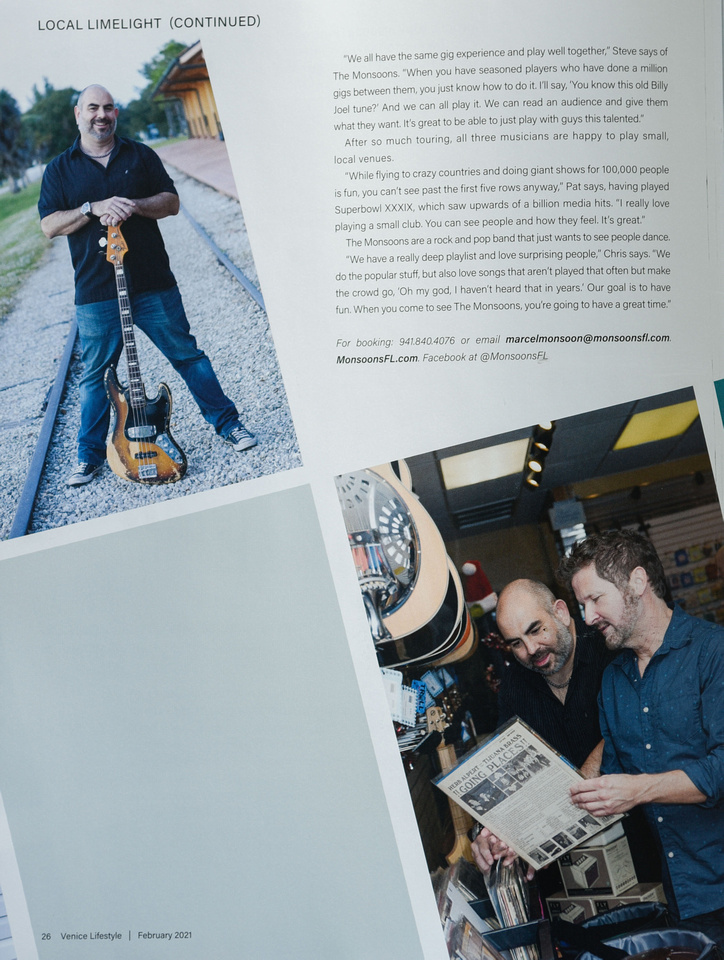 Charmaine Tincher(non-registered)
Your not only an Amazingly Talented Photographer, You are a very talented writer as well! :-) The details you wrote about how this photo shoot took life minute by minute was so fun to read! It exudes your Passion of the Love you have for people and your creative photography! How did we get so Fortunate? Thank you, Sassy Sisters!
No comments posted.
Loading...
I love meeting and photographing families and each person has a story to tell.  Unfortunately there's never enough time or space to share everything but here's a little story and a few pictures of the amazing people I get to work with.
Subscribe
RSS
Recent Posts
Palm Island Resort Family Photo Session with Kathy and Rick Manasota Key Senior and Family Photoshoot with Diedre and Troy Manasota Key Beach Family Photoshoot with Genna and Andrew Boca Grande Engagement Session with Mary and Drew Boca Grande Photoshoot with Dan and Jackie O'Dowd Venice Yacht Club Wedding with Abbie and Sam Englewood Beach Wedding with Taylor and Maeve Manasota Key Beach Wedding with Emily and Kevin Boca Grande Wedding Celebration with Lexie and Christian Englewood Beach Wedding with Al and Tracy
Archive
January February March April May June July August September October November December
© Stephanie Snow Photography
User Agreement
Cancel
Continue